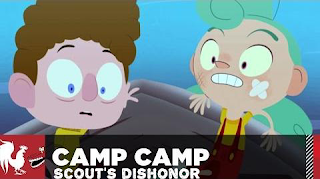 In the third episode of Camp Camp, new rivals are introduced and some background information is shed on one of the core trio of main characters.
In his continuing attempts to escape Camp Campbell, Max enlists the help of Billy "Snake" Nikssilp, a boy that escaped the Woodscouts, a military-style camp for boys. Snake takes Max, Neil, and Nikki on a boat out on the lake, however, Max soon realizes that they are headed in the wrong direction. When it's revealed that Snake never left the Woodscouts, he stabs Max in the back and throws Nikki overboard as his camp is for boys only.
Neil also fell overboard, leaving Max alone with Snake, who continued toward the Woodscouts camp. Meanwhile, Nikki and Neil wash up at the Flower Scouts camp. Nikki was originally part of this ultra-feminine camp for girls but switched to Camp Campbell as she felt the Flower Scouts were lame. Nikki and Neil, posing as a girl named Neeancy, are taken by the Flower Scouts into their camp. It is clean and orderly and has free Wi-Fi. Meanwhile, Max is taken to the Woodscouts camp.
This episode is a fun one, as the trio of Woodscouts, Pikeman, Petrol, and Snake, and the trio of Flower Scouts, Sasha, Erin, and Tabii all encompass stereotypical gender archetypes yet are interesting characters in their own right. On the boy's side, Pikeman is the overbearing leader, petrol is the silent one, and Snake is the tough guy. The girls encompass the mean girl archetype of girls that copy the queen bee, even to the point that they are all voiced by the same actress. Sasha is the aforementioned queen bee, Erin is the suck-up, and Tabii is the dim one. Out of all of them, Tabii with two I's is a standout, as she received a lot of laugh-out-loud lines.
I really liked this episode because it played with gender stereotypes and lampshaded them in a satisfying way. The first two episodes were fun, especially the premiere, but Camp Camp really hits the ground running with Scout's Dishonor. Forgive me for sounding like David here, but I wholeheartedly recommend this one, gang!
Final Verdict: