Fist of the North Star: Lost Paradise is a game by Ryu Ga Gotaku Studio that manages to do the seemingly impossible. It combines the popular open-world action RPG gameplay of the Yakuza series, in which the protagonist gets in fights with punks and solves the problems of civilians in districts of sprawling cities, with the post-apocalyptic Fist of the North Star series, in which the world has become chiefly deserted.
When I went into this game, the only thing I knew about the Fist of the North Star series was that it was a super violent take on a Mad Max-like post-apocalyptic world. After playing the game, I realize this is actually a pretty apt description. Kenshiro is the successor of a violent form of martial arts known as Hokuto Shinken, which allows practitioners to use pressure points in the body to either heal ailments or cause the body to spontaneously explode from the inside. He was made the successor as he only uses the violent form of his martial art on rivals that want to kill him and murderous punks that wear very-1980s shoulder pads and often sport mohawks.

Kenshiro has come to the aptly-named Eden, a walled city that is considered a paradise as it exists in the middle of the post-apocalyptic desert. He is searching for his lost love, Yuria, who is rumored to be inside the city. For fans of the Fist of the North Star series, other major characters appear although various storylines are retold differently to account for the existence of Eden. The characters of Eden are original, and fit the style of the series. The story does jump right into a confrontation with Shin, the rival of Kenshiro that left the seven marks on his chest. For people, like me, who aren't fans of the source material, this is a bit disorienting. Thankfully, the rest of the story is easy to follow.

Inside Eden, the Yakuza-style of gameplay, for which Ryu Ga Gotaku Studio is known, is executed remarkably well. There are bars, restaurants, and a coliseum to fight in. More familiar venues can be unlocked, such as an arcade, casino, and even a cabaret club. Various games for the arcade can be found with a buggy you unlock in the main story. Games include the familiar UFO Catcher crane game, OutRun, Space Harrier, and Super Hang-On. The neatest game to be unlocked is also the last. The 1986 Sega-developed Fist of the North Star beat 'em up can be played in Kenshiro's sleeping quarters, complete with a Sega Mark III console, the original Japanese version of the Sega Master System.

The cabaret club minigame is similar to the one in Yakuza 0. You recruit hostesses, which work like card-based RPGs. They are given ranks from common to super-super rare (SSR). Each time a hostess waits on a customer, she is given experience, but her health is depleted based on how the customer treats her. I like the ability to add two hostesses to each table. However, I dislike the training mechanism in this version of the cabaret club minigame. It's very superficial in that you have to give the hostesses gifts to increase their rank rather than training like in the other versions of the minigame wherein giving them gifts to increase their rank is optional rather than mandatory. That said, I do like the substories of the hostesses, especially the large woman who feels that she isn't feminine because of her looks. The way Kenshiro inspires her is very well done, and as a large woman myself, I appreciate that.

The Japanese voices feature voice actors from the Yakuza series. My personal favorites are Takaya Kuroda, the voice of Kazuma Kiryu, as Kenshiro, and Hidenari Ugaki, the voice of Goro Majima, as Jagi. Those two have iconic roles in the Yakuza series and they bring the same energy to this game. Plus, the stoic attitude of Kiryu fits with Kenshiro and the craziness of Majima fits with Jagi. Even more fun, there is downloadable content that lets Kenshiro have the appearance of Kazuma Kiryu. It's a bit weird seeing Kiryu causing thugs to explode, but the stoic attitude and voice acting of Takaya Kuroda, with the appearance of Kiryu, are a lot of fun for Yakuza fans. This game also has optional English voices, which is the first time this happened for a Ryu Ga Gotaku Studio game since the original Yakuza. Thankfully, the script translation works well with actors that speak English, and those actors fit their roles well.

Final Verdict:
4½ out of 5
Posted by Jennifer McMurray at 9:25 PM No comments: 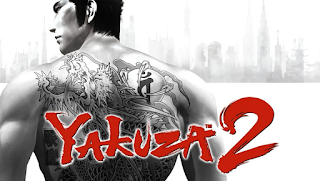 The second Yakuza game was bigger than the first, with the addition of a new district, Shinseicho, based on the real-life Shinsekai, as well as including the usual Yakuza series hangout spot, Kamurocho, based on the real-life Kabukicho. In the Yakuza Kawami remake, the second district was replaced by Sotenbori from Yakuza 0, which is based on the real-life Dotenbori. In the case of both Yakuza 2 and the Yakuza Kiwami 2 remake, in many ways, bigger does indeed mean better.
In this game, Kiryu Kazuma is approached by the fifth chairman of the Tojo Clan, Yukio Terada, who wishes to broker an alliance between the Tojo Clan and the Omi Alliance. After Terada is murdered, Kiryu decides to take on this goal himself, as he was the one who appointed Terada as the fifth chairman. Thus, he places his adopted daughter, Haruka, in the care of the orphanage where they both grew up, and sets out on the dangerous task to broker peace between the two biggest yakuza organizations in Japan.
The story of Yakuza 2, which takes place a year after the events of Yakuza, is often praised as being among the best in the series and within the top two with Yakuza 0. That praise is well deserved, as it is an exciting murder mystery with a lot of twists and turns thrown in. On top of that, the female detective, Kaoru Sayama, whom Kiryu first meets in this game is written superbly. The writers are good at writing for interesting female characters, but they usually are relegated to the women at the cabaret clubs. It is fun to interact with these women, who range from ultra-feminine to tomboyish. However, they rarely have a tough, yet feminine woman who can hold their own in a fight. That's a shame because Yakuza 2 showed that they could do it well. It took over a half a decade, with the release of Yakuza 5, for another tough, feminine woman to appear in a Yakuza game, and over another half a decade for a playable strong, feminine female character to become playable with the release of Yakuza: Like a Dragon.
Another awesome character is the Kansai dragon, Ryuji Goda, who is one of the main villains of the game, as he wants to defeat Kiryu, the Dragon of Dojima, to stake the claim as the only dragon in the yakuza. He is written and performed so well that he became popular with the fans enough to become a playable character in Yakuza: Dead Souls.
As for gameplay, this game is the one that shows its Shenmue lineage the most. Yakuza showed it with quick-time events, fetch quests, and a puzzle near the beginning of the game where Kiryu had to infiltrate the funeral of the third chairman of the Tojo clan. Yakuza 2 has these as well, but it has an actual adventure puzzle near the middle of the game where Kiryu has to interpret clues to open a safe. The puzzle is done very well, and, as a fan of adventure games, I'm happy that it was kept intact in the Yakuza Kiwami 2 remake.
Speaking of the remake, compared to Yakuza Kiwami, the controls are still a bit stiff and there is only one fighting style for Kiryu. In addition, some locations with mini-games are no longer accessible in Yakuza Kiwami 2, such as bowling, pool, and the Club Adam host organization. In addition, with the replacement of Shinseicho for Sotenbori, the Shinseicho minigames have been moved to Kamurocho and Sotenbori or removed entirely. Making up for it, however, some mini-games have been added to the Kiwami remake, including the Majima Construction clan creator and cabaret club management.
Yakuza 2 is an excellent game with multiple locations to visit, well-written and excellently voiced new and returning characters, and a superb plot. Any version is worth playing, from the PlayStation 2 original, the Japanese-only high-definition versions on PlayStation 3 and Wii U, or the Kiwami remake, although I wholeheartedly recommend playing the Yakuza Kiwami 2 remake. Yakuza 2 absolutely deserves its praise as one of the best games in the series, and the remake cements it there, even when compared to later games in the series.
Final verdict:

In 1978, Taito released Space Invaders, the hit video game that established the shoot 'em up genre as a heavy hitter within the video game industry.
I first played Space Invaders in 2000 while working on my arcade emulator, LASER. Unlike Lupin III, I had actually heard of this game before because it was a big-name game. It was and still is being ported to, and getting remakes and clones for, just about every platform imaginable.
Like all games on Taito 8080 hardware, it is a relatively simple game. It is a black and white game, although some arcades placed a color plastic overlay over the monitor to give the allusion that there are red and green colors on certain parts of the screen. There are score and life counters, invading aliens, a ship, and bunkers that can be shot through by the player and enemies alike. Some Japanese versions of the game displayed the color parts of the screen with a rainbow plastic overlay.
The object is simply to pilot a ship at the bottom of the screen, which can only move left and right, and to shoot the invading forces before they shoot you. When all the aliens are shot, the screen refreshes and another fleet of aliens need to be dealt with. With each new fleet, the game gets progressively faster. To paraphrase a quote from Lrrr in the animated television series Futurama, instead of shooting where the ships are you should shoot where they are going to be.
There is also very little sound. There is the whirring sound when a bonus ship floats by the top of the screen that can award extra points, the zap sound that occurs when you shoot, and a simple four-note progression that acts as the music. These simple sounds work very well, however, and even the four simple notes that are played throughout gameplay surprisingly work well and don't become annoying with extended play.
The whole game is incredibly simple, but it is far from being tedious. Like Pac-Man, it is one of the early arcade games that truly stands the test of time. I was not born when the game came out and I didn't get a chance to play this game until decades after its release. However, even decades after my first time playing, I will still play it whenever I get the chance. Anyone interested in video games should try it at least once. It is a true classic.
Final verdict:
4 out of 5
Posted by Jennifer McMurray at 7:29 AM No comments: