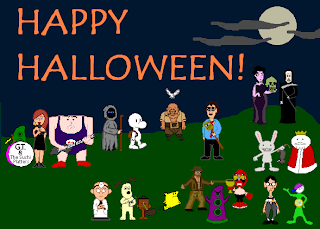 Happy Halloween again everyone! Once again, the treats are a-plenty on this holiday! Telltale's Dave Grossman has posted another one of his annual pumpkin pictures in The Pumpkin House of Horrors. He goes all out this year, with a total of eight carved pumpkins in the picture!

Next up, is the Telltale Halloween contest! Thanks to the flood of Monkey Island fans into Telltale's fanbase this year, the contest had more entries than ever! That means that the winner won't be announced until about the second week of November, but it also means there's a lot of really impressive fan art that can be shown off! Check out the Telltale Blog for those! Telltale's been adding more fan drawings in their blog posts every day! Oh, and of course, I entered in the contest again this year. Check out my video "A Telltale Halloween" if you want to. :)

And, for the final piece of Telltale-related Halloween goodies, The 2009 Homestar Runner Halloween cartoon is out!
Posted by Jennifer McMurray at 2:52 PM No comments:

Monkeys On PC and Inventors On Xbox 360

Tales of Monkey Island Chapter 4: The Trial and Execution of Guybrush Threepwood is now available to season purchasers for the PC!

Keep an eye out for more surprises from Telltale coming soon too. More Wallace & Gromit news should be coming soon, and Telltale's newest unannounced series should be announced soon, since it's in it's testing phase now!
Posted by Jennifer McMurray at 10:50 PM No comments:

CSI: Deadly Intent is Out!

Telltale's latest game based on the CSI Las Vegas series, Deadly Intent, is out now. The PC version will be able to be purchased and downloaded from Ubisoft's site on October 29th. The PC and Xbox 360 versions were developed by Telltale, but the Nintendo DS version was developed by Other Ocean.
Posted by Jennifer McMurray at 8:02 AM No comments:

Sam & Max Beyond Time & Space out on XBLA

Sam & Max Beyond Time and Space, formerly known as Season Two, has finally been released on Xbox Live Arcade in a bundle pack like the first season of Sam & Max on Xbox Live Arcade. Be sure to pick it up if you've never played it before or if you really have to catch them all when it comes to Xbox Live Arcade achievements. :)
Posted by Jennifer McMurray at 4:19 PM No comments:

Brütal Legend, the second game from Double Fine Productions, is now out in stores in North America for PS3 and Xbox 360!

Brütal Legend is the seventh game from the mind of Tim Schafer, who previously co-wrote the first two Monkey Island games (along with Ron Gilbert and Dave Grossman), and brought us Day of the Tentacle (along with Dave Grossman), Full Throttle, and Grim Fandango at LucasArts, and Psychonauts at Double Fine.
Posted by Jennifer McMurray at 4:23 AM No comments:

The LucasArts puzzle platformer, Lucidity, is now out on Steam, Direct2Drive, and Xbox Live Arcade.

If you are having problems running the game, this post on the Steam forums might help you.
Posted by Jennifer McMurray at 5:37 PM No comments:

Brütal Legend Demo is Out for Everyone!

The Brütal Legend demo release party is happening today. Yes, today is the day everyone who didn't pre-order Brütal Legend gets to try the demo out for themselves. A short promo video for the game is also out.

The party will have interviews, a live Twitter Q&A, live axe lessons, and a message from Tim Schafer. And they will also be giving away some goodies! It all happens at Noon PST (GMT -5).
Posted by Jennifer McMurray at 8:32 AM No comments:

Congratulations on 20 years Tim! I enjoyed all the games you worked on, even when you were a scummlet on the NES version of Maniac Mansion. Here's to 20 more years! :)
Posted by Jennifer McMurray at 8:14 AM No comments: