Law & Order: Legacies joins the ranks of Wallace & Gromit's Grand Adventures as another Telltale series that is no longer available for sale from digital storefronts. If you already purchased the game you should still be able to download the game from the digital storefront where you purchased it. Otherwise, there is no longer any way to purchase it digitally as the game has been removed from sale on Steam, the Telltale store, and iTunes.

Luckily, all hope is not lost, as like Wallace & Gromit's Grand Adventures, the PC version was released at retail, so it's still available while supplies last for people who still want it. However, unlike Wallace & Gromit's Grand Adventures, the retail version of Law & Order: Legacies was only available in the United Kingdom. So, outside of eBay, Amazon UK is your only chance to get it now.
Posted by Jennifer McMurray at 5:48 PM No comments:

Indiana Jones and the Call of Thunder Fangame Released 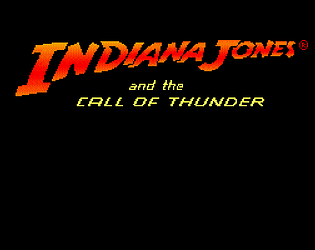 I finally got myself familiarized with ScummGen, the compiler that takes C-style code and compiles it into resources used by the actual SCUMM engine (used by LucasArts for all of their adventure games from Maniac Mansion to The Curse of Monkey Island, and by Humongous Entertainment in most of their games until 2003). I polished up the ScummGen test game, Indiana Jones and the Call of Thunder.

The original team (Dominik Haslinger, Jens Doblies and Sebastien Ronsse) did the majority of the work.  It was originally intended to be a much longer game, but it was cancelled.  I finished up the ice cavern sequence so that it could be released as a completely playable game as I thought it would be a shame if no one got to play it.  Their sourcecode was playable up to the point where you complete the mechanism in the cavern.

Here are the changes and fixes that I made to that source code:

-Replaced LucasArts logo with a ScummGen logo.
-Made a few grammar corrections to the original script.
-Created icons for inventory items that lacked them (all instances of the stones and the gas can).
-Programmed an if/then statement regarding the gas can that was referenced but not implemented in the source.
-Fixed the mechanism puzzle to require both objects, as before it was possible to complete it with only one object.
-Added dialog to facilitate the change in the mechanism puzzle.
-Fixed the lighting so that the cavern stays lit when you move to the cavern entrance and back.
-Enabled the usage of the item used to exit the cavern, as referenced but not implemented in the source.
-Changed the description of the macguffin as it was originally used as a joke related to the game being unfinished (but kept it humourous to suit the tone of the original).
-Added dialog necessary for the ending sequence.
-Added an ending screen.

You can download it at my itch.io page if you want to try it out.  It includes the sourcecode.  It doesn't include an executable though, as it needs ScummVM in order to run (and I figured I'd cut out the middle man and just let people run ScummVM on whatever system they wish to run it on).  It's detected in ScummVM as Day of the Tentacle.
Posted by Jennifer McMurray at 7:26 PM No comments:

Dave Grossman, co-designer of the first two Monkey Island games and Day of the Tentacle, as well as the director of design at Telltale for most of their existence, is designing the new Futurama mobile game that was teased at E3 earlier this year.

Futurama: Game of Drones will be written by Futurama producer and writer Patrick Verronne, who wrote some of the best episodes of the series, including The Problem With Popplers.

According to the press release, it will have an original story line set in the Futurama universe that follows the Planet Express crew as they compete with shipping monopoly MomCo. Players will control networks of drones in order to solve puzzles and advance the story.

Futurama is one of the titles that was on my wishlist for games to be turned into adventure games for years, and, although this won't be the same, Dave Grossman is one of my favorite designers, so it should be a lot of fun.
Posted by Jennifer McMurray at 3:29 AM No comments:

The third episode of Minecraft: Story Mode releases for all platforms that have already received the game today, worldwide.

In other Telltale news, Game of Thrones will be getting a second season.  This was assumed from the moment of the announcement, as Telltale signed a multi-year, multi-platform contract, but now it's official.  No release window has been announced for Game of Thrones: Season Two, but Telltale has a pretty full plate from their already announced projects.  Because of this, it's likely the game won't be released until late 2016 or 2017 at the earliest.
Posted by Jennifer McMurray at 3:27 AM No comments:

Telltale's Game of Thrones finale will be released tomorrow for all platforms, worldwide. The entire season will also be available at retail tomorrow, as well.
Posted by Jennifer McMurray at 8:03 PM No comments:

I've joined the modern age and set up a Patreon page. I've actually had it up for a while, but felt a little uncomfortable advertising it. My comfort level hasn't changed, but since no one will know about it unless I let them know about it, here it is.

Along with writing adventure game news and reviews on this blog, I also make animations, videos, webcomics, animation, music, games, and photography.  I've got my goals set low on this, as I'm still a bit uncomfortable with the monetary side of things.  I would really appreciate any amount though.  And, if you don't want to pay anything, don't worry.  I really appreciate anyone who reads my blog (and/or reads/watches/listens to/plays my other projects).
Posted by Jennifer McMurray at 8:10 AM No comments:

The first chapter of a three part 3D point and click mystery adventure game, Mirrored, is now available on Steam for only $3 USD.
Posted by Jennifer McMurray at 9:02 AM No comments: