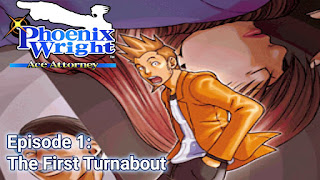 The game was split up into episodes and was released episodically for Windows and Wii. It works well for this style of game, as each episode contains a new case that is taken on by Phoenix Wright, a young defense attorney. The game is set within a semi-fictional Japanese law system, where each case has to be dealt with quickly and can only last three days. As this game was released in the early 2000s, the official English translation tries to remove the Japanese references as much as possible and sets it in the United States instead. This leads to some disconnect with Japan-exclusive concepts such as attorney badges being used in the United States. Thankfully, however, it's not too distracting even if you do know about Japanese culture, as these can be chalked up as being part of the game's then-futuristic setting of 2016.

Final Verdict:
4 out of 5
Posted by Jennifer McMurray at 2:00 PM No comments: