The Perils of Man Is Now Out On Steam and iOS

At long last, the adventure game by IF Games, designed by Bill Tiller and Gene Mocsy, which also sees Mr. Mocsy as lead dialog writer, is finally out on iOS, and Mac and Windows through Steam today.  If you already purchased The Perils of Man on iOS when Episode 1 was released, your app will be updated to the full version of the game at no extra charge.
Posted by Jennifer McMurray at 3:30 PM No comments:

Labels: autumn moon, if games, the perils of man

GOG.com continues bringing LucasArts games to their platform, with the newest batch of games, in celebration of the upcoming Star Wars Day celebrations on May 4th.  So, of course, that means that all of the games in this batch are of the Star Wars variety.

The games included in this batch of releases include Star Wars Rebel Assault I and II, Star Wars Jedi Knight II: Jedi Outcast, and Star Wars Jedi Knight: Jedi Academy. In addition, they've added the much requested collector's CD versions of Star Wars X-Wing and Star Wars TIE Fighter, which is included with the other versions of the game already available, which means that if you already ordered these games from GOG.com, or if you'll get them now, you'll get the DOS versions, the DOS CD versions, and the Windows versions with your purchase.

GOG.com also has sales on all Star Wars games that they carry in two bundles, the The Star Wars Blaster Bundle and the Star Wars Saber Bundle.
Posted by Jennifer McMurray at 1:13 PM No comments:

Update April 28: It's now available for non-backers on Steam and GOG.com as well. It's also available on every other platform today, as Act II is a simultaneous release.

The Double Fine Adventure Kickstarter page has been updated with the news that the full version of Broken Age is going out to backers a day early.  If you're a backer and want to play, check your e-mail for a code, and then following the directions on your humble bundle download page on how to unlock it on Steam.

For everyone who didn't back the game, or if you want to play it on another platform than Steam, the game will be released tomorrow.
Posted by Jennifer McMurray at 2:21 AM No comments:

Grim Fandango Remastered is getting an official soundtrack release.    37 tracks will be included, and it will be available from standard digital retailers in two weeks.

The soundtrack from Broken Age will also be getting the same treatment, and is scheduled to be released next week.
Posted by Jennifer McMurray at 12:09 PM No comments:

Order of the Thorne And Roehm To Ruin On Kickstarter

There is a kickstarter going on for three new games from Infamous Quests, the creator of Quest from Infamy. The first game that will be funded by this campaign is Roehm To Ruin, prequel to Quest for Infamy, where more is revealed about where Roehm came from, and how he got himself into the mess that led him to flee to the Valley of Krasna.

The kickstarter also will fund two episodes of Order of the Thorne, an anthology series where games and stories are set within the same land, but have different protagonists and stories in each game. The episodes which will be produced as a result of this Kickstarter include The King's Challenge, which is about an intrepid bard who embarks on the King's Challenge to save his Queen, and The Fortress of Fire, which follows Patrick "Addy", a young Squire to seasoned veteran knight, who is in for the fight of his life, as he sets off on a quest to save his waylaid master as they set off to explore the mysterious "Fortress of Fire".

There is currently eight days left at the campaign, so if this interests you, head over to the kickstarter page and pick a pledge tier.
Posted by Jennifer McMurray at 11:02 PM No comments:

Labels: infamous quests, order of the thorne, quest for infamy

The Intergalactic Trashman is On Kickstarter Now

The Intergalactic Trashman is a kickstarter project for a 2D platformer and space exploration game that will be released for Windows, Mac, and Linux.  It blends a wide variety of genres, as the crew pilots their spaceship, which will let them navigate through space, collect trash, explore planets, while they are dealing with enemies and solving puzzles.

On some planets, they will find entrances to 2D platform stages. In those stages Kepler will need to use his agility to deal with dangers, and his weapons to get rid of his enemies.  If this sounds like something that interests you, head over to The Intergalactic Trashman kickstarter and pick a pledge tier.
Posted by Jennifer McMurray at 6:02 PM No comments:

Sorcery! 3 Is Out Now

Sorcery! 3, the third part of inkle's narrative fantasy adventure adaptation of the Steve Jackson Sorcery! game books, is out now on iOS at the App Store and for Android through Google Play.
Posted by Jennifer McMurray at 5:38 PM No comments:

Telltale and Marvel Team Up For Project In 2017

Telltale Games announced today that they have teamed up with Marvel Entertainment to make a Telltale game series project that will premiere in 2017.

Nothing else is known about the project at this point, but with this, and the announcement that Telltale is teaming up with Lionsgate for joint television show and game projects, the future looks pretty bright over at Telltale Games.
Posted by Jennifer McMurray at 5:54 PM No comments:

The Femijam Game Jam Has Been Extended To May 6

The first game jam by Femicom, the feminine computer museum, was set to end today, but the deadline has been extended two weeks to May 6, 2015.

The theme is "Here's to Theresa Duncan".  This game jam is all about creating games inspired by her three storybook adventure games, Chop Suey, Zero Zero, and Smarty, which were re-released for free play via online emulation earlier this month.

Sorry about the late relay of the news, as I just found out about the game jam yesterday.  Since there is now two more weeks left, hopefully I'll be able to get an homage of my own up for it by the deadline.
Posted by Jennifer McMurray at 9:13 PM No comments:

Last year, a successful kickstarter campaign ensured that the three adventure game storybooks aimed at young girls, created by Theresa Duncan (Chop Suey, Smarty, and Zero Zero), would be available for free online, for a minimum of one year.

Today, that goal has come to fruition, as the three games are now available online through emulation, and can be played in the player embedded above, or directly here.
Posted by Jennifer McMurray at 11:06 AM No comments:

Point and Click Adventure Review: The Perils of Man Episode 1 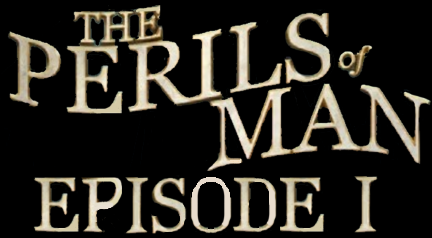 The first chapter of The Perils of Man was a fun adventure game that was fun on its own, and showed great promise for things to come.  The first episode of The Perils of Man is now available, adding two more chapters to the impressive start of the story that began in chapter one.  So far, episode one has lived up to expectations, and in some ways, even exceeded them with a new gameplay mechanic that brings something new to the table, while working well with the inventory based puzzles that are staples of the adventure genre, rather than feeling shoe-horned into the game.

The puzzles in chapter one are as sharp as ever, and the inventory and dialog puzzles in the other two chapters continue that momentum, but the brilliance in this episode comes from the mechanic introduced in chapter two, and first put to use in chapter three.  The Perils of Man has always been advertised as a game about risk, and although we got a taste of that with Ana's mother, that theme really comes into the picture here.  Ana finally discovers how to use the gift that her father left her, and begins a journey through time to protect people by minimizing risk.  While the rest of the game is presented as a point and click adventure on a traditional side scrolling two dimensional plane, once Ana puts on her Risk Atlas, the game switches to a third person perspective, allowing Ana to analyze the risk of objects around her.  Once she discovers the risks, Ana can minimize the risk through inventory puzzles and discussing the situation with the characters around her.

The new locations are quite interesting, and complement the dollhouse art style already seen in the first chapter at the Eberling estate.  The music once again fits the locations nicely, and all of the characters are interesting as well. Each character, both new, and returning, are quirky, yet believable.  The slightly grating, pretentious tone of Ana's mother is still present, but so far she's regulated to just the first chapter, so it's not too distracting.  The rest of the characters are voiced quite well, especially Ana's new sidekick, the steampunk robot bird, Darwin.  We also get a taste of one of the most intriguing characters, just as Ana completes her first foray into her family's legacy.  Thus, the episode ends on a satisfying note, while leaving a nice cliffhanger that leaves you wanting more.

Episode One of The Perils of Man is a fantastic start to what looks to be a fantastic adventure.  The inventory and dialog puzzles are very well done. The new third person perspective risk atlas mechanic fits the story well, making it feel like it blends well with the rest of the game, rather than feeling like an afterthought.  The music, art style, quirky characters, and voice acting also are well done, and fit the tone of the game well.  There is one part that's a bit confusing, as it requires you to guide a light to a location by holding it down and rotating it, which is a mechanic that hadn't been used in the game at all up to that point and there is nothing in-game that explains it.  Other than that small hiccup however, the game is fantastic, and is one of the better adventures in recent memory.

Posted by Jennifer McMurray at 6:27 PM No comments:

Dead Synchronicity Is Out Now

The successfully Kickstarted psychological horror adventure game, Dead Synchronicity, is out now on GOG.com and Steam.
Posted by Jennifer McMurray at 5:28 AM No comments:

The LucasArts releases keep coming on GOG.com.  This time they have released Afterlife, a twist on SimCity, where you have to make the afterlife of people the way it should be, by serving punishments to those in hell and pleasing those in heaven.

As in most LucasArts games of the 1990s, this one has a cameo of Max from Sam & Max, who were pretty much the studio's mascots up until the turn of the century.  And this cameo is a fun one to boot.  Just type in SAMNMAX in all caps three times to summon him.
Posted by Jennifer McMurray at 8:02 PM No comments:

Fire Is Out Now

Daedalic's newest game is quite a depature from their regular games, but it is a ton of fun. The game is Fire, a puzzle adventure reminiscent of the Gobliiins series, where you control a caveman named Ungh whose ultimate goal is to find fire.

The secondary goal is collecting creatures throughout many lands who are trapped in glass bubbles. There is no dialog, just the occasional caveman gibberish and grunts, but the game's story is quite funny, through it's fun animation and quirky puzzles.

It's currently available for purchase for Windows, Mac, and Linux for 10% off on Steam.
Posted by Jennifer McMurray at 7:54 PM No comments: