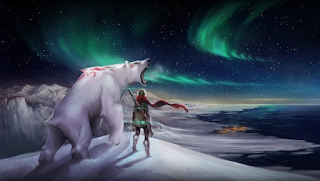 The game which received the grant is tentatively titled Codename: Svalbard. It is an RPG that has a female protagonist, and is set on the island of Spitsbergen. In the game, climate change and global warfare lead to a destructive nuclear winter. Generations later, what is left of humanity tries to rise again to rebuild civilization.  The key to the Earth's future lies beneath the ice, on Svalbard.

Codename: Svalbard is and RPG that will be able to be played with one or more players.  No release date has yet been set, but it will be released after Draugen, which won't begin full production until Dreamfall Chapters has completed.
Posted by Jennifer McMurray at 11:37 AM No comments:

I'm back from PAX East. I'll post about my experience at the show in a bit, but for now, I'll catch up on some of the releases that have happened lately.

The Walking Dead: Michonne, the miniseries by Telltale Games that reveals what happened to the character of Michonne during the period when she left the group in the comics after the events of All Out War, is now complete, with yesterday's release of episode 3.

Also receiving its third episode yesterday was King's Quest, the official ninth game in the series, by The Odd Gentlemen.  This episode, Once Upon A Climb, tells the story of how Graham saved his future wife Valanice, who is also Gwyndolyn's grandmother.
Posted by Jennifer McMurray at 11:55 AM No comments:

Double Fine Will Be at PAX East this weekend

Double Fine will be coming to PAX East this weekend. They'll be at booth #6123 showing off Day of the Tentacle Remastered and Headlander. They'll also have three Double Fine Presents titles, Gnog, Gang Beasts, and Everything. A new title will be shown at the show as well.

They'll also be selling merchandise at the show, including the Raz and Two Headed Baby Pinny Arcade pins, and a new special edition game bundle box. The bundle contains 10 games, with 10 game cards drawn Jon Magram and Melissa King. The game cards can be seen below (click to see them in a larger size). 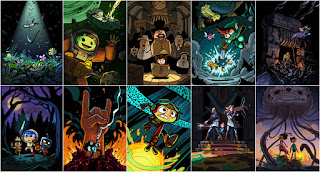 I'll also be volunteering at the Double Fine booth at PAX East this weekend, so if you're at the show, come by and say hello. :)
Posted by Jennifer McMurray at 10:32 AM No comments:

Update: 4/19 10:45PM: Two more games have been added to the bundle: Jurassic Park: The Game and Strong Bad's Cool Game for Attractive People.

Note that all of these games are redeemed through Steam only, as there is no DRM-free option available. There is about a week left to pick this bundle up, and there are hints that more games will be added to the package soon.
Posted by Jennifer McMurray at 10:28 AM No comments:

Telltale has been using Minecraft: Story Mode to try out new ideas, and the pacing of the series is no exception.  There is still one more episode to go in the season pass, but with this episode the Wither Storm story line is wrapped up in a satisfying, yet emotional conclusion.

As the episode begins, Jesse's gang and the Order of the Stone are both dealing with the effects of the events of the last episode.  Everyone has to team up with an unlikely ally, and in the process Jesse learns more about the Order than anyone had before, outside of the Order themselves.    The previous episode broke out of the mold of the traditional losers turned heroes story line, but this episode completely turns expectations on its head.  The story of this series has never been presented better than it is here.

Thankfully, the game play also manages to live up to the standards of the story.  There are some interesting puzzles, and the action sequences are quite memorable.  There are also some choices and consequences here that make a noticeable difference in the final moments of the game. There are quick time events, of course, bur as with the rest of the episodes in this season, they are balanced by the excellent hit counter based directly controlled combat system.  The only drawback in the game play is a maze half-way through the episode, which is not puzzle based, but trial and error based.  It's a small maze, and it doesn't last long, but it's a shame that they didn't use a puzzle to solve the maze, as they showed they can do it well in Tales of Monkey Island.  As it stands, the maze just feels like a way to artificially extend the play time.

The presentation is once again excellent as well.  The new locations are quite interesting, and as usual the blocky graphic style fits the retro 1980s feel that was the inspiration for the story.  The music once again also manages to capture that feeling fantastically.  The voice actors are also on the top of their game in this episode.  As this is the conclusion to the storyline, we get to see more of characters that haven't appeared much in the season.  These characters stand right up against the main cast, which is a testament to the skill of the voice actors.  Some of them even get their personalities and backstories more fleshed out in this story, which also helps the game not feel as one-dimensional as it did in early episodes.  This may be a family friendly story, but as Wallace & Gromit's Grand Adventures showed previously, Telltale can still deliver a fantastic story and interesting characters in a family friendly environment.

The fourth episode of Minecraft: Story Mode is a surprise early ending to the Wither Storm story line, but it is handled quite well.  The story is the best in the season, delivering plenty of surprises, and fleshing out characters, giving the whole game more depth than was evident early in the season. There are also some choices and consequences that have a noticeable effect in the story. The music, puzzles, and art style all continue to shine, and the voice actors give some of their best performances to date.  The only drawback is a maze that feels like it is there just to artificially extend the play time. Thankfully though, the maze is a short one, so it doesn't detract from the rest of the game, which is fantastic.  Telltale has used Minecraft: Story Mode as a testing ground for new ideas, and they have succeeded.  It's certainly their most diverse game in the modern era, and possibly the most diverse game they've ever made.  It's well worth experiencing the story of Jesse's group and the Order of the Stone.