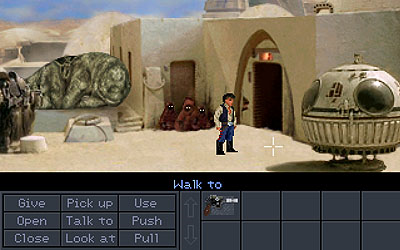 Update January 14, 2014: The game's website is now dead, but the game is not. Stacy Davidson clarified that he killed the website because he'd rather have the game fly under the radar by developing it quietly and then releasing it when it's done, in order to avoid the legal department of Disney. The game can now be followed (and a demo can be downloaded) at this thread on his game development company's forums.

With LucasArts having me so excited about them getting back into the business of adventure games, I'm starting to get into the giddy fan girl mode over them again. :)

Part of being a giddy fan girl revolves around creating and enjoying fan creations that center around the company's creations. I'll admit, I've never been a big Star Wars fan. I just watched part two of the original three all the way through last year, and I've watched bits and pieces of part one and part three. I've also only watched bits and pieces of the new three, and I've never played a Star Wars video game.

The bit about me never playing a Star Wars game will change in the near future, however, if Stacy Davidson releases Han Solo Adventures. The game stars Han Solo (played by Harrison Ford in the first three Star Wars movies), and it is set before the events of the original Star Wars movie.

There is a clip on YouTube that Stacy created for the Star Wars Uncut project (which gives fans a chance to film 15 seconds of a scene from the original movie, and then the movie will be pieced together from those scenes). The scene in the video below includes voices (because it is a scene from the movie). Voice acting will not be included in Han Solo Adventures, it will be purely text like the "non-talkie versions" of LucasArts adventure games from the early 1990s.

Stacy has said that the first game will merely be the first chapter of the Han Solo Adventures. This is definitely one Star Wars fan project that I will be keeping an eye on. :)
Posted by Jennifer McMurray at 10:02 PM No comments:

Telltale is pretty close-lipped about their projects. They don't announce them until they are just about ready to release the first episode in the series. But that doesn't mean that they haven't given hints to what their future series might be. Lately, there seem to be quite a few mentions of possible new series at Telltale. So, I'm going to start a new feature here that looks at Telltale rumors and I'll dissect the probability of that property getting released in a completely unscientific way. :)

I'm starting this feature off with the biggie. Fans want a Day of The Tentacle sequel. After Monkey Island, it's probably the most fan-requested LucasArts property there is. And we already have Tales of Monkey Island to enjoy. So, what's the likelyhood of seeing an episodic game set in the Maniac Mansion universe?

In June 2009, after the announcement of Telltale licensing the Monkey Island series for Tales of Monkey Island, Videogamer.com interviewed Dan Connors, Telltale's CEO.

"I always think of Sam & Max, Day of the Tentacle and Monkey Island as the big three franchises," Connors continued. Seeing as two of the three are under the company's belt already, that makes DOTT the logical next step, but it's "having a 'wait and see' approach with Monkey."

As for the "wait and see" statement, things are looking good financially speaking for LucasArts to want to continue their adventure franchises. LucasArts' own Secret of Monkey Island: Special Edition was #1 in sales on it's week of release on all of it's release platforms (Xbox Live Arcade, Steam, and Direct2Drive), beating out some heavy hitters in what are generally thought to be more popular genres. Telltale's CEO Dan Connors told Videogamer.com that Tales of Monkey Island is Telltale's "strongest performing franchise to date”.

It looks like the chances of this rumour coming true are very high. I personally can't wait to see the Edisons again after all these years. And, with Dave Grossman on the Telltale Team (he was the co-leader of Day of the Tentacle with Tim Schafer), the franchise couldn't be passed into better hands than Telltale.
Posted by Jennifer McMurray at 10:25 PM 3 comments:

Ghost Pirates of Vooju Island, Autumn Moon's second game, is set to be released soon. The Pumpkin Post has a new trailer for the game available. It's on YouTube here, or you can play it below. Check out the box art in the final shot. It's preliminary (it says the box art isn't final, but it's nice to see boxart since that makes it just that much closer to being released :)).

Posted by Jennifer McMurray at 7:05 PM No comments:

Siege of Spinner Cay is Out!

Siege of Spinner Cay, the second episode of Telltale's Tales of Monkey Island series, is now out for the PC! The Wiiware version will follow shortly.
Posted by Jennifer McMurray at 11:07 PM No comments: