After yesterday's news of Dragon History support, the ScummVM team brings more good news. Another former commercial game that was the first CD-ROM game in it's country (in this case Poland) has been added to ScummVM. Today ScummVM officially supports Teenagent, which can be downloaded for free from GOG.com.
Posted by Jennifer McMurray at 1:39 PM No comments:

Dragon History is a freeware open source adventure game that was the first Czech game to be released on CD-ROM when it was a commercial title. This summer a student participating in the Google Summer of Code adapted the game to ScummVM. Today, after some fine tuning by the student, the ScummVM team, and one of the original programmers of Dragon History, the game is officially compatible with ScummVM. So grab a daily build of ScummVM and head over to the Dragon History website and pick up the game in English, Czech, or Polish, and try out the game on any one of the dozens of platforms to which ScummVM has been ported completely for free!
Posted by Jennifer McMurray at 10:28 AM No comments:

Capcom has put up a new browser based demo of their upcoming Nintendo DS game, Ace Attorney Investigations: Miles Edgeworth.

I have not played an Ace Attourney game before, but the demo makes me want to play more. I've heard nothing but praise for the Ace Attourney games, so hopefully this entry is worthy of its predecessors. If nothing else, it's good to see Capcom changing the formula up a bit.

Click here to play the demo.
Posted by Jennifer McMurray at 7:35 AM No comments:

Independent adventure game developer Wadjet Eye Games is offering 50% off select titles and donating a portion of all sales to the Get-Well Gamers Foundation (www.getwellgamers.org), a California-based public charity dedicated to bringing electronic entertainment to children in healthcare facilities.

All of Wadget Eye Games adventures are included in the deal, but the 50% off coupon can't be used in conjunction with the Blackwell Bundle. The offer also includes some third-party games.

In order to save 50% on select titles, make sure to type the promotional code “HOLIDAY” when prompted.

In site news, you'll notice that the site name has changed again, this time to The Adventuress. I've been adding non-LucasArts inspired companies to the site, so I decided it was time for a change in scope. I enjoy adventures in general, and not just LucasArts adventures, so I thought this was a good change. :)
Posted by Jennifer McMurray at 4:58 AM No comments: 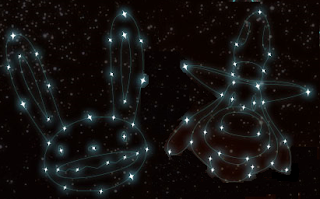 A new Sam & Max 2010 page is up at Telltale. You can click on the stars in the background for concept art, as well as audio of a narrator. What's interesting about that is that the audio mentions that you won't be pointing and clicking, and that "you are all that stands in the way of the total annihilation of the planet Earth".

The concept art shows space themed graphics, and the audio would definitely seem to point to an adventure in space. As The International House of Mojo points out, Justin Chin's no-longer functioning business, Infinite Machine, once held the rights to Sam & Max and were making an action adventure game called Sam & Max Plunge Through Space. Is it possible that Telltale is resurrecting this game?

Justin Chin joined Telltale in 2008, but he has since left. It's certainly possible that he was working with Telltale on Sam & Max Plunge Through Space during his time there.

Update: V-Ben pointed out in the International House of Mojo comments that Justin Chin's Linked in profile lists Justin's current position as owner, operator, and artist of Infinite Machine, Inc, although this time it's listed as part of the motion picture industry rather than the games industry. Even so, it's very possible that he could be freelancing at Telltale through Infinite Machine. If the new game is Sam & Max Plunge Through Space, it would be great to see an Infinite Machine logo attached to the game. :)

UPDATE: Jake Rodkin confirmed at Mixnmojo's comments section that it's not based on Sam & Max Plunge Through Space.
Posted by Jennifer McMurray at 12:59 PM No comments:

The Pumpkin Post posted news that you can pre-order the English version of Ghost Pirates of Vooju Island now directly from the publisher, Mamba Games, for £29.99. The release date for the English version is March 26, 2010.
Posted by Jennifer McMurray at 10:07 AM No comments:

Rise of the Pirate God is out now for PC!

Rise of the Pirate God, the final chapter of Telltale's Tales of Monkey Island, is now available at Telltale's website for season subscribers, and also available as a single episode download!
Posted by Jennifer McMurray at 9:08 PM No comments:

Rise of the Pirate Screenshots. Plus Earl Boen!

Rise of the Pirate God comes tomorrow. The Telltale Blog has screenshots of that episode for those who can not wait.

If you need to catch up, check out the new trailer that sums up what's happened in Tales of Monkey Island so far.

You'll notice that Earl Boen does the lines of the Zombie Pirate LeChuck from Launch of the Screaming Narwhal, which were originally done by Adam Harrington. In the Mixnmojo comments section, Telltale's Jake Rodkin mentioned that an Earl Boen voiced Launch of the Screaming Narwhal will be released, but he doesn't have any information on when the release date will be.
Posted by Jennifer McMurray at 8:35 PM No comments:

Gamepro conducted an interview with Tim Schafer wherein he revealed that more downloadable content is coming for Brütal Legend, both in multiplayer and single player content.
Posted by Jennifer McMurray at 8:32 PM No comments: