Armikrog, the adventure game created with clay by the creators of The Neverhood, is now available for Windows, Mac, and Linux on Steam and GOG.com.
Posted by Jennifer McMurray at 9:57 PM No comments:

The Adventuress Will Be At Con on the Cob 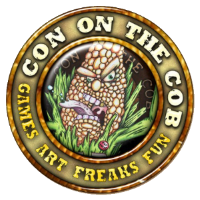 The Adventuress will be at Con on the Cob, the gaming and art show that is taking place in Richfield, Ohio from October 15th through October 18th, 2015.

If you're coming, The Adventuress will be part of the DreamCon booth outside the vendor hall.
Posted by Jennifer McMurray at 10:32 AM No comments:

Dontnod Entertainment has posted news on their blog that they are aiming to release Polarized, the fifth and final episode of their choices and consequences adventure game, Life is Strange, on the 20th of October.
Posted by Jennifer McMurray at 7:28 AM No comments:

80 Days and Sorcery! Coming To PC and Mac this Fall

The iOS and Android adventure games 80 Days and Steve Jackson's Sorcery parts one through three are coming to PC and Mac this Fall.

80 Days is an adventure set in an alternate version of Jules Verne's Victorian Era that sends players throughout a steampunk world.  It will be the first of the games to be released, coming to Steam and other online stores on the 29th of September.

The games spun off from the Steve Jackson's Sorcery! gamebooks, will be releasing shortly afterward, with parts one through three being released as an episodic release.
Posted by Jennifer McMurray at 9:51 AM No comments: