Telltale's Mark Darin has been interviewed by Wii World about Strong Bad's Cool Game For Attractive People.
Posted by Jennifer McMurray at 10:15 PM No comments:

Drascula is Now Free With ScummVM

Drascula isn't a Telltale game (or a game by the people who work there), but it's sort of relevant because it now can be downloaded completely for free and played in ScummVM. ScummVM was originally created to play the SCUMM (Script Creation Utility for Maniac Mansion) games by LucasArts (Maniac Mansion to The Curse of Monkey Island), and many of the people working at Telltale now made those SCUMM games.

So, this post IS relevant in a Six Degrees of Kevin Bacon kind of way. :) Plus, I can't help but promote a previously commercial but now freeware adventure game. :D
Posted by Jennifer McMurray at 11:42 AM No comments:

Telltale wants to know which box art you like better for the upcoming Sam & Max Season One Wii release. Make your opinion known. 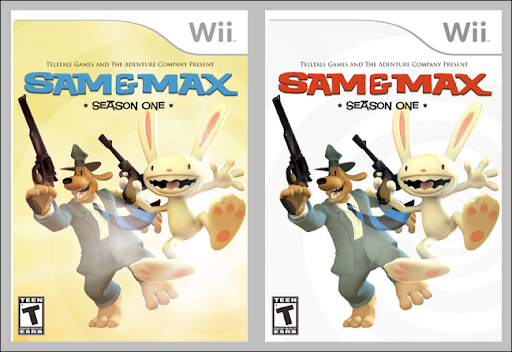 Posted by Jennifer McMurray at 7:37 PM No comments:

For those of you who have yet to experience the games based on Jeff Smith's Bone comics, there is now one more option for you to get the game. Both games in the series, Out From Boneville and The Great Cow Race, are now available on Steam.

The episodes can be bought individually for $8.99 each, or in a double pack for $14.99. They can also be found in the Telltale Everything Pack, which features the Bone games, both seasons of Sam and Max, and Telltale Texas Hold'em for $69.99.
Posted by Jennifer McMurray at 11:17 PM No comments:

I have a personal blog on Wordpress, and I wanted to try out Blogger, so I decided to make this one a little more focused. So, I decided to dedicate my blog to my favorite company, Telltale Games (and occasionally the adventure games created by these great folks when they were over at LucasArts).
Posted by Jennifer McMurray at 12:53 PM No comments:

Everything Below This Line Is Just Site Pages

Posted by Jennifer McMurray at 12:01 PM

Bone: Out From Boneville was Telltale's first adventure game. It was released on September 15, 2005.  A Mac port, developed by a company called Vanbrio, was released on October 13, 2006.

Bone: Out From Boneville was Telltale's first episodic game, and was based on the comic of the same name by Jeff Smith. Phoney Bone gets the Bone cousins tossed out of town. A swarm of locusts cause the Bones to get lost in a new land.

The retail versions of Bone: Out from Boneville are out of print, but the PC version can still be purchased digitally online through Steam.

Go Inside Bone: Out From Boneville
Review
Posted by Jennifer McMurray at 11:59 AM

Dráscula is an adventure game by the Spanish developer Alcachofa Soft. In the game, a British real estate agent named John Hacker has to rescue a blonde woman who has been kidnapped by Count Dráscula.

The game is available for free from the ScummVM downloads page.

Posted by Jennifer McMurray at 11:59 AM

Last Life is a three part episodic adventure game based on modern adventure games such as Kentucky Route Zero and Telltale's The Walking Dead series, where a detective must investigate his own murder. It was to be developed by Rocket Science Amusements and published by Double Fine Presents.

However, Double Fine severed ties with the project.  It had a successful Kickstarter crowdfunding campaign, however as no updates have been made on the project since 2017, and the author does not reply to comments from backers, it is unlikely it will be released.
Posted by Jennifer McMurray at 11:59 AM 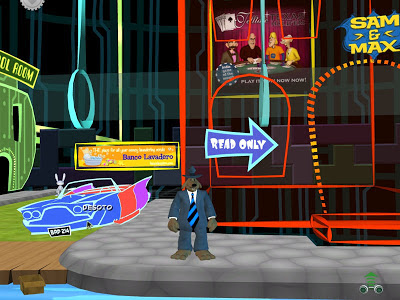 In Reality 2.0, there is an ad floating by for Telltale's first game. 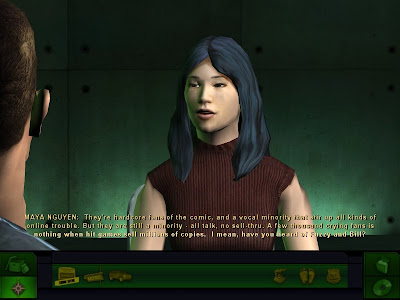 "A few thousand crying fans is nothing."

Maya Nguyen, the marketing director of LZP Games explains the marketplace realities that are the company's reasoning behind the cancellation of Fuzzy & Bill as well as the ignorance of fan outcry towards the cancellation.

In-joke image from The International House of Mojo

More CSI: 3 Dimensions of Murder Injokes:
Posted by Jennifer McMurray at 11:57 AM

Posted by Jennifer McMurray at 11:57 AM 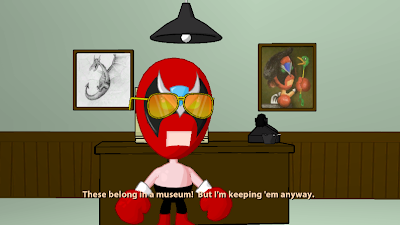 "These belong in a museum! But I'm keeping 'em anyway."

One of Dangeresque's remarks when you click on the paintings in his office is that "these belong in a museum! But I'm keeping 'em anyway". This is a reference to Indiana Jones saying that the cross of Coronado belongs in a museum in Indiana Jones and the Last Crusade. This was also used as an injoke in many LucasArts adventure games.

More Dangeresque 3 Injokes:
Posted by Jennifer McMurray at 11:56 AM 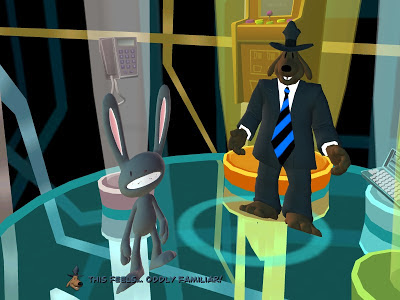 After Sam and Max are flattened to two dimensions, Max states that the feeling of being in 2D is familiar to him (since Sam & Max: Hit the Road was a 2D point-and-click adventure game).

Posted by Jennifer McMurray at 11:56 AM

Loom is a LucasArts adventure game that gets rid of the typical SCUMM interface in favor of a magical staff. No items are collected and no verbs are selected. Everything is done with a combination of musical notes called drafts. Throughout the game, more complicated drafts are learned which let you do more things, and let you access new areas. Two sequels were planned but were never completed.

Explore Loom, courtesy of The Weaver's Guild:
Review
Posted by Jennifer McMurray at 11:55 AM

Spiders! Why'd it have to be spiders?

During the first mission, Malcolm is captured by spiders. He says "Spiders! Why'd it have to be spiders?" and later "Spiders. I HATE SPIDERS!" Indiana Jones said the same thing, but about snakes rather than spiders, in Raiders of the Lost Ark. The spider scene also references the fact that sidekicks in the Indiana Jones films end up having creepy crawly creatures on them at some point during the adventure.

Later, in the first "Calendar of the Sun" mission with Indiana Jones, Indy actually says his lines from the films "Snakes! Why'd if have to be snakes?" and "I hate snakes!"

Infinate Ventures released a port named "Shadowgate Classic" on Gameboy Color in 2000 and on mobile phones in 2005.

A high definition remake was announced by Zojoi (a company founded by former ICOM employees) in 2012.  The remake was crowd funded through a successful Kickstarter campaign, and was released for PC and Mac on August 21, 2014.  The Android and iOS versions of the Shadowgate remake are scheduled to be released some time in Fall 2014.
Posted by Jennifer McMurray at 11:54 AM