ScummVM has reached a big milestone, it's 1.0.0 release. In versioning terms, this means that ScummVM is no longer in the beta phase, and is now considered stable software! This means for all 100 games ScummVM officially supports (yes ScummVM hit 100 games for its 1.0.0 release, isn't that cool? :) ), the games have been extensively tested and were found to be completable with either no problems (like the DOS, Windows, and Macintosh versions of LucasArts SCUMM games!) or just minor graphical problems. There's no showstopping bugs in the games that are supported anymore!

So, go visit ScummVM.org and pick up ScummVM to play the LucasArts classic adventures before Grim Fandango (plus many more games from other developers!) for your Windows, Linux, Macintosh, BeOS, Amiga, or Atari computer. Or pick it up for Wii, iPhone, GameCube, PlayStation 2, Dreamcast, or any of the many other supported devices!
Posted by Jennifer McMurray at 2:43 PM No comments:

Ghost Pirates Gets a Publisher For Its English Release

Autumn Moon's Ghost Pirates of Vooju Island is already out in Germany, but fans outside of Germany have been wondering when we'll hear information about an English release. We don't have to wait any longer, because Ghost Pirates now has an English publisher, UK-based Mamba Games. According to their latest press release, the game will be released in 2010, but a specific release date has not yet been announced.
Posted by Jennifer McMurray at 6:20 AM No comments:

It's been a while since I last posted a rumor mill article, and surprisingly I hadn't yet posted about what is probably the biggest rumor going around. That rumor involves LucasArts creating a special edition of Monkey Island 2: LeChuck's Revenge in the same vein as their Secret of Monkey Island Special Edition.

The rumor is beginning to pick up steam, with the release of issue 70 of the UK magazine Retro Gamer. This month's magazine has a Monkey Island cover, a retrospective on the series, and new interviews with Ron Gilbert, Dave Grossman, and Steve Purcell.

Even more exciting is that inside the article, Retrogames wrote this tidbit about future special editions:

As for the future, that will depend on how the current projects perform. But with The Secret of Monkey Island topping the Steam and XBLA charts, and Tales proving to be Telltale's most popular game in its history, we're confident that the story hasn't finished yet. Monkey Island 2 Special Edition is inevitable, and we're told by our friends at LucasArts that next March might be a special month for fans.

I'd also like to point out that not only has the Monkey Island SE been performing well on Xbox 350 and PC, but that it has also been selling well for the iPhone.

Interesting side note: The Retro Gamer guys told me that when they went to get the okay from LucasArts to use the MI2-artwork, LucasArts was actually concerned about that, because - as they put it - "they haven't released Monkey Island 2 yet". Sounds like it's going to get a definite re-release... question is: will it be an SE?

As to the power of this rumor, I'd have to agree with Retro Gamer's comments that a special edition of Monkey Island 2 is inevitable. Whether the March timeframe is accurate or not remains to be seen, but it's pretty clear we'll be seeing a high resolution presentation of Guybrush's second adventure some time in the near future.
Posted by Jennifer McMurray at 6:00 AM No comments:

Capcom has put up a new browser based demo of their upcoming Nintendo DS game, Ace Attourney Investigations: Miles Edgeworth.

I have not played an Ace Attourney game before, but the demo makes me want to play more. I've heard nothing but praise for the Ace Attourney games, so hopefully this entry is worthy of its predecessors. If nothing else, it's good to see Capcom changing the formula up a bit.

Posted by Jennifer McMurray at 7:47 AM 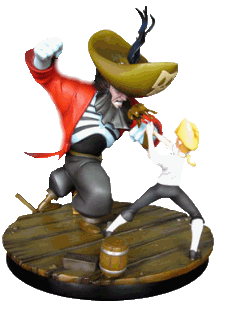 The Monkey Island Symbiote Statue is now shipping. It is a limited edition of 1000 pieces and is available for $90 from The LucasArts Company Store or directly from Symbiote Studios. If you buy the Monkey Island statue directly from Symbiote, they have a deal where you can get the Sam & Max statue for half price (usually $75 and also a limited run of 1000 pieces).
Posted by Jennifer McMurray at 10:09 PM No comments:

Ghost Pirates is Out in Germany

I was doing my usual checking of The International House of Mojo, and saw that Ghost Pirates of Voojoo Island, Autumn Moon's second game, is now out in Germany. German speaking people can pick it up from the dtp entertainment shop for €37,45 or from amazon.de for €32,95.

An announcement about an English release should be happening soon.

Posted by Jennifer McMurray at 12:43 AM No comments:

So, if you haven't picked up any of those seasons yet, now is the time to get them!
Posted by Jennifer McMurray at 3:27 AM No comments:

First of all, the third episode of Wallace & Gromit's Grand Adventures is now free for the PC until the 8th of November! Also, the entire season is only $20 during that time as well!

Every episode that is purchased will have a portion of the proceeds donated to Wallace & Gromit's Children's Foundation in the UK and Penny Arcade's Child's Play in the US. Free digital copies of the game will also be donated to children's hospitals supported by the charities.

Also, DVD pre-orders are now being taken for the season subscribers of the PC version from Telltale's website. Season purchasers will get the game for just the cost of shipping! It will include the four games, behind-the-scenes videos, image galleries, as well as the entire set of Wallace & Gromit's "Cracking Contraptions" shorts and more!

Lastly, it's been a long time coming, but now Xbox 360 players can play the entire season of Wallace & Gromit's Grand Adventures because Telltale has released all four episodes to Xbox Live Arcade today!
Posted by Jennifer McMurray at 3:16 AM No comments:

Brütal Legend now has downloadable content available for both Xbox Live Arcade and PlayStation Network. The Brütal Legend Tears of the Hextadon map pack expands the Brütal Legend Stage Battle multiplayer experience with two new multiplayer maps. The Xbox 360 got the maps first. It's available since yesterday for 400 MS Points. However, PlayStation 3 users get the better deal. The content won't be available until tomorrow, but it will be free on that system until until November 19th, when it will become $4.99, whereas Xbox 360 users will have to pay for it from the get-go.

The two maps are called Circle of Tears and Death's Fjord. In the first map, Circle of Tears, vile waters have carved a rough-hewn circular battlefield into a forsaken land that players must circumvent to destroy their opponent. In the second map, Death's Fjord, players find themselves on an icy mountain pass with a dense cluster of fans that lie below, waiting to be harvested by those brave enough to capture them without cover from enemy attack. All players who download the new map pack will receive a free axe, the Blade of Ormagöden.

Tim Schafer hosted a multiplayer death match live from Double Fine showcasing the new maps, and GameTrailers has a video of it, if you're curious on how they play.

Posted by Jennifer McMurray at 1:52 PM No comments: