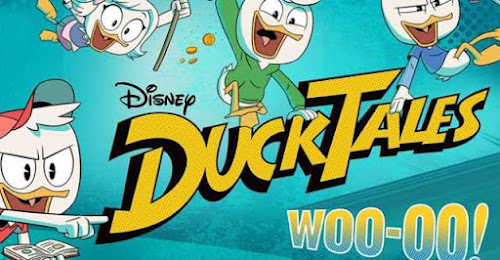 This review was originally posted on the McMurray Internet Channel website on March 6, 2019.
Disney XD has aired an excellent DuckTales series for the past couple of years. It combines the classic 1987 DuckTales series with elements from the classic Carl Barks and Don Rosa Scrooge comics, and wraps them in the modern style of Disney shows such as Gravity Falls.

Woo-oo was the premiere episode of the show, and it definitely started strong. Donald Duck is worried about his nephews as he goes to interview for a new job, so he drops his nephews off at his Uncle Scrooge’s mansion. There is obvious bad blood between these two, as the boys didn’t even know that Scrooge was their uncle, and Donald and Scrooge haven’t spoken to each other in years.

Once we get to the mansion, we’re treated to an excellent surprise in the presentation of the characters. The classic DuckTales was excellent, but for a show aimed at children, the children on the show were surprisingly un-fleshed out. Huey, Dewey, and Louie didn’t have distinct personalities, and the personality that they were given were those of boy scouts, or junior woodchucks, as the case may be. This time the show takes a cue from the Quack Pack series, and not just because the twins have the voices of pre-teens rather than ducklings. They now have distinct personalities. Louie is mischievous, as his brothers refer to him as the “evil twin”, and he agrees. Dewey is daring and is an adventure seeker. Huey is the only one who retains the junior woodchuck personality, and, probably as a nod to that fact, he is the only twin that wears a baseball cap.

In the classic DuckTales, Webby was much younger than the boys and was scared of the adventures that Scrooge and the boys had and usually stayed home. Here, Webby is around the same age as the boys and resembles Mabel from Gravity Falls in many ways, and not just because the two enjoy grappling hooks. She is strong, resilient, and outgoing.

Mrs. Beakley is also given an overhaul. Before, she had a grandmotherly personality and served as the traditional maid of the mansion. She is still the maid, but now she is super strong and has a no-nonsense personality.

However, Launchpad is still Launchpad. He’s still a plane-crashing airhead with a heart of gold, and that’s for the best as he was the breakout original character of the classic series.

Beyond the characters, we’re treated to a fun adventure as the characters learn about Scrooge and Donald’s adventuring past. They also reinvigorate Scrooge, who had retired from adventuring. They get to see that he can still fight magical monsters despite his age, and he sees that he cherishes their youthful enthusiasm as they make him want to go on adventures once again.

Plus, in the end, we’re treated to a tease of the return of Scrooge’s archenemy Flintheart Glomgold. In that same tease, we’re also treated to more Donald Duck. His absence is one of the biggest drawbacks of the classic series. Donald is one of Disney’s major six characters, so it always seemed a bit weird that Donald was missing from the classic series, relegated to a few cameos. When I was a kid, the Donald episodes were always among my favorites, so it’s great news that he has a greater presence in the modern DuckTales.

Woo-oo was an excellent introduction to DuckTales, both for new fans, and for fans of the classic series. The fact that the characters are all given distinct personalities even rises it a bit above the classic series. It really is a complete treat for fans, new and old.