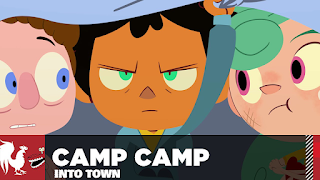 In the Camp Camp episode, Into Town, Max has pushed David so far that he plans to leave Camp Campbell. Max, Nikki, and Neil sneak into the camp's station wagon so that they can see what David plans to do now that his cheerful exterior has begun to crack.
The kids are disappointed when the town has few shops and resembles a 19th-century Old West town more than one from the 21st century. Neil discovers an electronics store, and Max tells him to go inside but to watch out for David so that they don't become stranded there. Despite being older than he is, Neil becomes enamored with the cathode-ray tube television sets on the display shelves.
Meanwhile, Max and Nikki check out three other shops for any sign of David. These include a bar, a shop named Muffin Tops, and a hardware store. Each stop includes funny interactions and gags. There is also a funny visual gag going on throughout the episode involving Nikki. I didn't catch it until Neil pointed it out and I rewatched the episode with it in mind. It's a series of really subtle changes that really encapsulates Nikki as a person.
This episode was fun, as it cranks the Max and David feud up to eleven. This is also the first indication that David even ever wants to leave Camp Campbell, let alone does it. It doesn't really propel the series forward, however, the sheer amount of jokes make up for it.
Final Verdict: