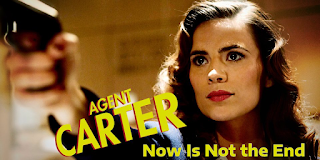 This review was originally posted on the McMurray Internet Channel website on December 10, 2018.
The first episode of Agent Carter picks up after Captain America: The First Avenger at the end of World War II. Agent "Peggy" Carter of the Strategic Scientific Reserve is still trying to cope with the loss of her love interest Captain America while finding herself in a world that is becoming ever more hostile to her life as an active field agent at a time when men are returning home from war while women are laid off from the jobs they had during wartime to return back to their expected roles as wives and homemakers.

Her former war ally Howard Stark, a wealthy inventor, founder of Stark Industries, and the best civilian pilot she had ever seen, finds himself sidelined from founding S.H.I.E.L.D. and in trouble when the United States government. Congress believes that he had staged a break-in at his secret vault so that he could sell his most dangerous weapons on the black market. With no one else he could trust, Howard Stark turns to Agent Carter, granting her the services of his butler and driver Edwin Jarvis, so that together they could retrieve his weapons and clear his name.

The first weapon, and the most dangerous, is the formula for an experimental implosion device, molecular nitromene. It uses the same vita radiation as used in Project Rebirth, the top-secret government program that created Captain America. Stark and Jarvis want Peggy to try to get the formula back before the thieves can weaponize their own version.

The short runtime of this season, with only 10 episodes, did a great deal for it, since the episode manages to introduce the main characters exceptionally well while still maintaining an action-film level of excitement as Agent Carter and Jarvis rush to keep Stark's implosion device from the hands of the mysterious Leviathan. By the time the episode reaches its conclusion, it hardly feels like it has been on for even half its 42-minute runtime, and the conclusion leaves you wanting more. Thankfully, in the era of Blu-rays, Hulu, and binge-watching, that's easily accomplished.