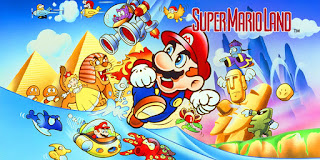 In the game, Mario travels to Sarasaland where he rescues Princess Daisy from an alien known as Taranga. Even though the formula is pretty much the same with Peach switched with Daisy and Bowser switched for Taranga, some of the play mechanics are very different. This makes the game feel fresh, even thirty-three years after it was first released.

Most of the power-ups are familiar to Super Mario fans. There are mushrooms that cause Mario to grow if he is small. 1-Up mushrooms, which grant an extra life, have been replaced with 1-Up hearts due to the fact that the monochrome graphics would make it hard to distinguish between different mushrooms. The power-up change that changes the way the game plays is the power of the flower. In this game, flowers give the power of superballs rather than fire. They can be used in the usual way, to kill enemies. However, they can also be used to collect coins. Mario can shoot them into areas that he can't reach, allowing him to collect coins in passages that only small Mario would normally be able to reach.

Another change in the gameplay comes in the water level. Instead of swimming, there is a Mario-sized submarine named the Marine Pop that's used instead. The submarine can shoot missiles as well as collect coins, which gives the level the feel of a horizontal shooter rather than a platformer. The horizontal shooter aspect is only used again in the last stage, with an airplane known as the Sky Pop. I really wish that they'd use the vehicles again, as I really enjoyed the two shooter levels. I do not mind the traditional underwater levels, but I actually found it more fun to power a submarine through them rather than swim.

The game was only officially released in monochrome for the Game Boy, however, there is a fan patch named Super Mario Land DX that turns the game into a full-color Game Boy Color game. This patch adds color to the game and changes the sprite graphics to more closely match other games in the series. It is very well done.

Super Mario Land is an excellent game that deserves to be played. If you are able to play the game using the Super Mario Land DX fan patch, such as playing the cartridge on the RetroN 5 with the patch loaded from an SD card, I highly recommend playing the game this way. However, if you are only able to play it with monochrome graphics on the Game Boy cartridge or on the Virtual Console for Nintendo 3DS, the game is still worth playing. The gameplay mechanics that are unique among Super Mario games, as well as fun music, tight platform mechanics, and great level design, make this one a must-play.

Posted by Jennifer McMurray at 10:28 AM