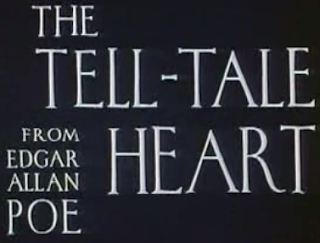 The Tell-Tale Heart review was previously published on Jupiter Beagle on October 13, 2008.

The Tell-Tale Heart is a 1953 animated short film by Columbia Pictures, directed by Ed Parmalee. It is based on the famous short story of the same name by Edgar Allen Poe. This is a really spooky animated short, and it is the best adaptation of an Edgar Allen Poe short story I have seen in any medium.
The Telltale Heart is about a madman who kills an old man just because his eye irritates him. The murder eventually drives him crazy, and he thinks hears the beating of the man’s heart coming from where he buried him.
The film is narrated with the dialog from Poe’s short story, and the narrator has a suitably macabre tone. I can understand why they decided to do this film in animation, as the visuals are stunning and really do a lot to convey the thoughts of insanity as the lead character goes farther and farther into madness.
This short film is a brilliant adaptation of a brilliant short story, but since the subject matter is intended for mature audiences, please note that this is not a film for children.
If you are not offended by spooky subject matter and disturbing images, do yourself a favor and watch this film as the Tell-Tale Heart is available on some streaming services.
Final Verdict:
5 out of 5
Posted by Jennifer McMurray at 7:28 PM