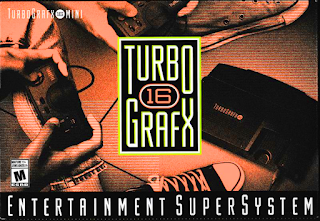 The system comes with one two-button controller. The Japanese version contains fifty-eight games, while the international versions contain fifty-seven. This console has some of the best games of the 16-bit generation and is easily the miniature console that packs the best games in its library. It is truly quality over quantity, although the international versions have a lot of games that are still in Japanese.

The Japanese version contains the same game list except for Salamander and with the addition of Far East of Eden II: Manji Maru and Heartthrob Memorial.

As with the other mini consoles, I’ll be looking in-depth at the above games in the future, and the links will be updated accordingly. This console has finally put the TurboGrafx at the top of the heap. The emulation is excellent and the console is packed with great games.  I recommend the Japanese version as the two exclusive games are excellent and the arcade version of Salamander is now available through Hamster's Arcade Archives. If you modify your console to accept other games, you will get the most out of your console because a lot of these Japanese games have unofficial English fan patches.

Note: The USB wall plug is not included. Make sure you use one that is 5 volts, 2 amps (2000 mA). There have been reports of the system bricking itself if the wrong plug is used.

Posted by Jennifer McMurray at 6:44 PM