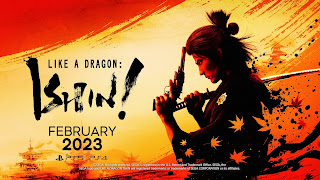 Like a Dragon: Ishin!, the Yakuza samurai spinoff with Yakuza characters as mostly real-life figures from Japan's Meiji Restoration during the Edo Period, is getting a remake for PlayStation 4 and PlayStation 5.

Even better news, it is coming to the west with an official English translation. The original game was released for PlayStation 3 and PlayStation 4, however, it never left Japan.

It will be available worldwide in February 2023.

Posted by Jennifer McMurray at 6:29 AM