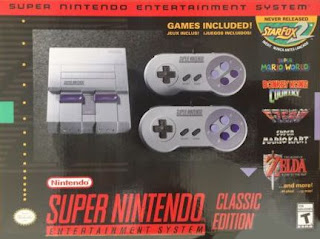 Nintendo followed up their popular NES Classic Edition with a system that is arguably even better than the former: the Super Nintendo Entertainment System Classic Edition.

The system runs on the same Allwinner R16 “system on a chip” as the NES Classic Edition, with a 1.2 gigahertz quad-core Cortex-A7 central processing unit, a 500 megahertz dual-core Mali-400 ARM graphics processing unit, 256 megabytes of random access memory, and 512 megabytes of Flash storage.

Posted by Jennifer McMurray at 8:52 PM